How can I accomodate a playroom extension?

The majority of the clients we work with are young families or couples that are planning to start a family. For those with young children one of the biggest issues they encounter is that their home has gradually been taken over with toys and they are looking to extend their house to either have more space for storage or to create a playroom. I have been in so many homes where the living room has been taken over with toys and kitchen sets. The good thing is even a small rear extension can free up enough space to build a playroom, in fact there are several options available. Our Projects

The most common types of extensions we design to accommodate a playroom would be a single storey rear extension. Adding this on the rear of the house will allow you to create an open plan kitchen and living space which allows for your existing living room to turned into a playroom for the children.

If the thought of your kids being hidden away in a separate room worries you then you can still create the open plan space across the rear of the house and then open up the rear reception room with either a full width opening or with internal bi-folding or pocket doors so you can still keep an eye on the children when they play but also have the option to close the space off and hide the clutter.

A single storey side extension can work in a similar way. You can use the back half for a kitchen extension and introduce some large bi-folding or sliding doors to let light into the space and then use the front section to create the playroom, this could be separate to the kitchen with a door accessing the space from the hallway.
Alternatively, the wall that divides the kitchen from the play room could be removed or have doors installed, glazed doors work well in this scenario as it allows natural light in to the space from both the front and rear of the property.

If you are thinking about a side extension and have around 3 metres or more from the side wall of your house to the boundary you could consider a double storey extension. Not only will this allow you to have a ground floor layout as above you could then build an additional bedroom and ensuite on the first floor.

Adding an extra bedroom to your home can increase the value of the property by 20% which when most three bedroom semi-detached properties are valued at £500,000 in the current market the increase in value will go a very long way to paying for your extension.

Most people don’t really consider a loft conversion as a way to create a playroom in their home, it might not be the best having young children playing alone up there but a hip gable roof alterations and a rear dormer creates a huge space on the second floor. It can make for a great room for a teenager which means no more PS4 or XBox in your living room.

You could also move the master bedroom up to the loft which depending on the size of your house could have an ensuite and dressing room which would free up a bedroom on the first floor for a playroom. 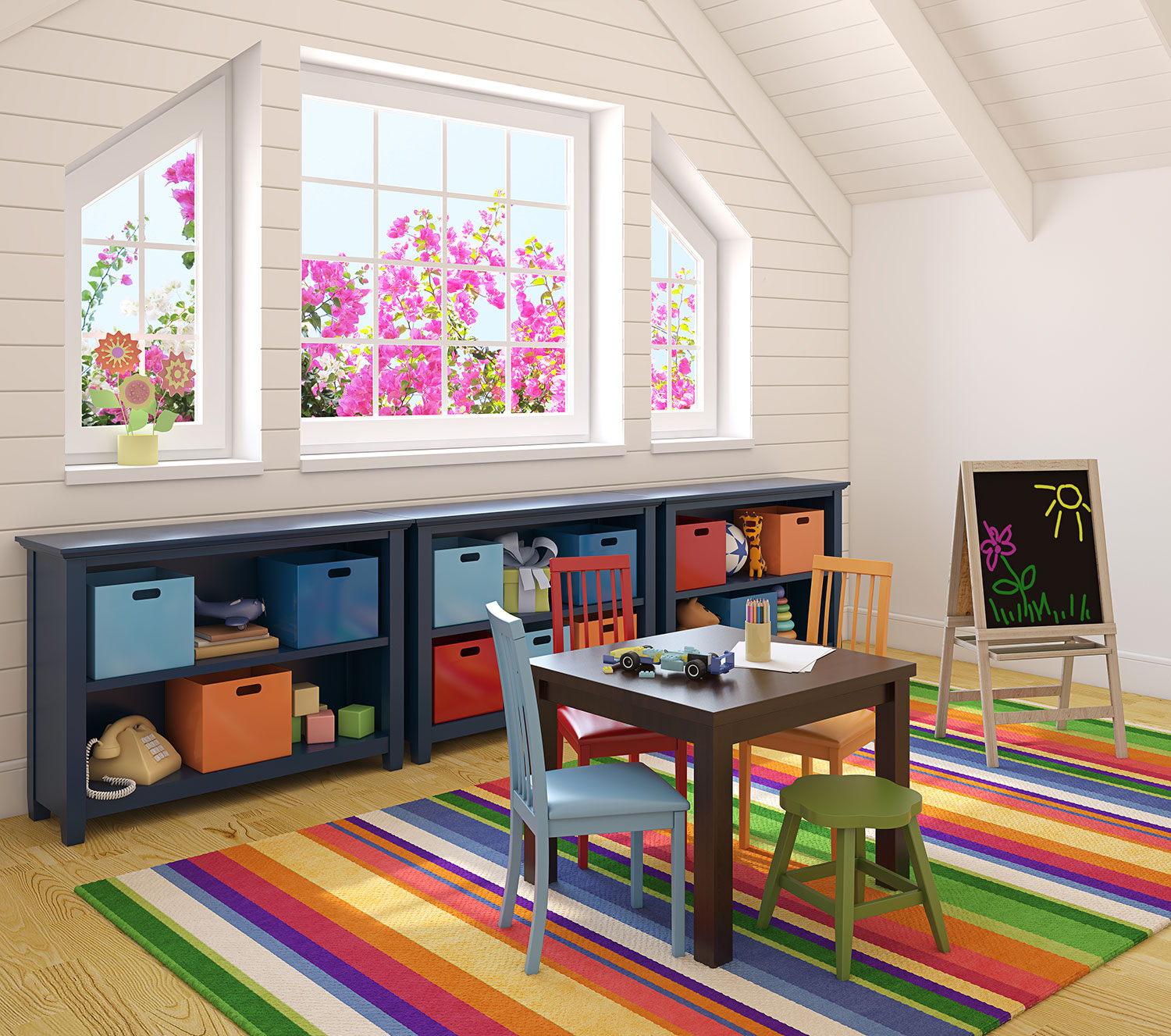 You could also take advantage of your permitted development rights (you do not require planning permission) and build an outbuilding in your garden. Under these rules as long as you keep the overall height under 2.5 metres when measured from the ground up to the highest part of the roof you could build a building that runs the full width of your garden and if you wanted to could have up to 50% of the garden space around it.

This can then be used as a great playroom, leaving enough space to split the building into two with the other half being used as a store for garden furniture and bikes.

Another great option is a garage conversion, this works better if the garage is integral or attached to the house. You can simply remove the garage door and replace this with a large window and install a door in your hallway leading straight into the new playroom.

Like the garden room in most cases this type of works will fall under works that can be carried out under permitted development. By doing this you can avoid having to submit a planning application which will usually take 8-10 weeks for a decision to come through.

Both toddlers and teenagers have a reputation for mess so whatever age group your playroom is intended for it will need to be robust and versatile.

Easy to clean finishes such as wood or tiled floors are a must and ensure you pick a product that is known for its durability. Solid wood floorboards can dent and change shape, whereas engineered floorboards are generally harder wearing whilst still attractive. Endurance paint is also a must in any high traffic area and will mean you walls stay free of sticky toddler hand marks for longer.

Storage is another key design feature not to be overlooked and can be relatively cost effective thanks to the likes of Ikea. A more expensive and perhaps more attractive option for those seeking the ability to use the space not only as a playroom may want to consider bespoke built in units to hide the mountain of toys behind.